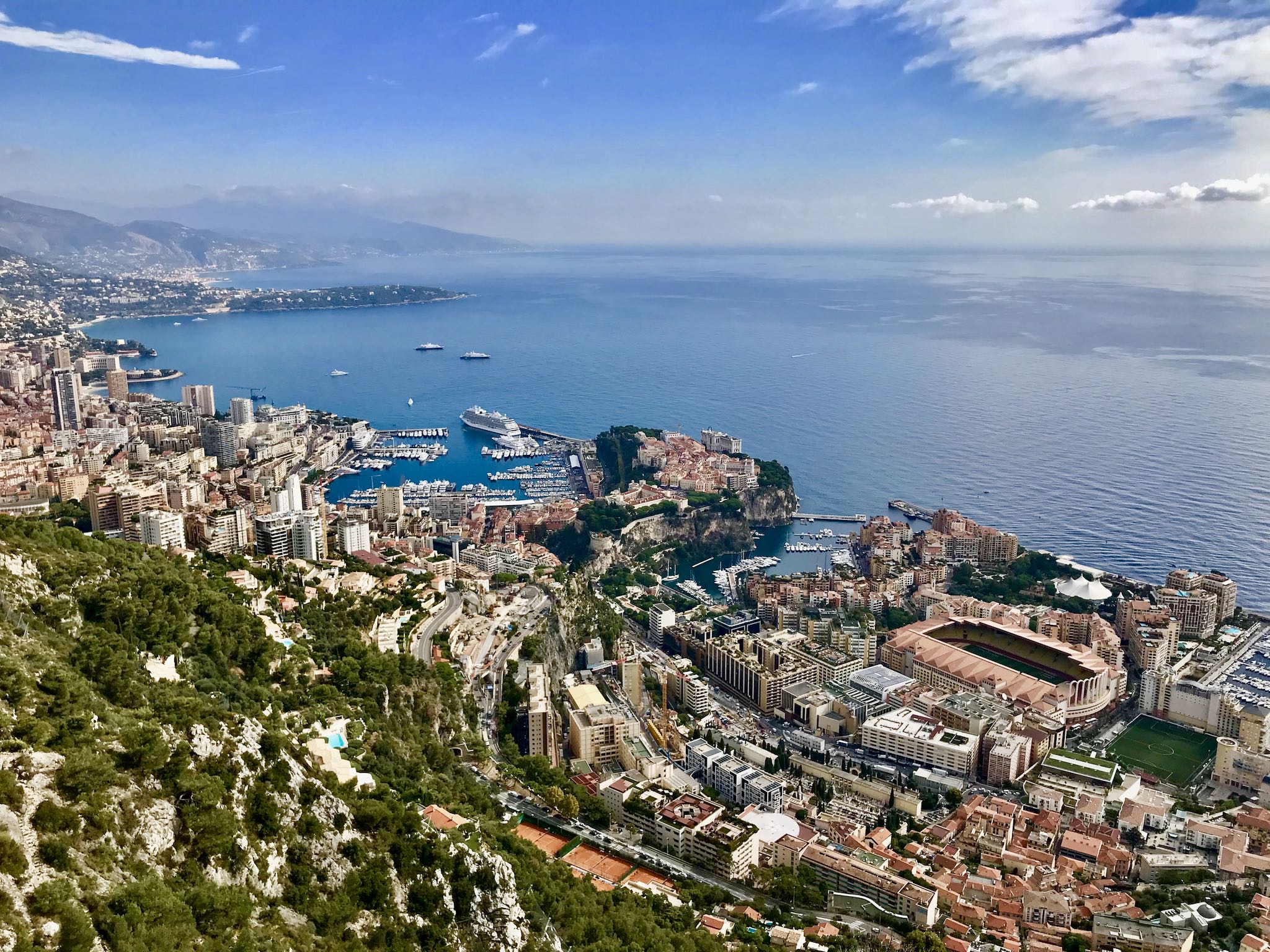 • Transfer duties to be paid by the purchaser at the rate of 5,81% (notably in Alpes Maritimes department) of the price,
OR, rarely to :
• VAT at the rate of 20,00%, included in the sale price and to be paid by the seller, in case the property has been completed for less than 5 years (purchased on plan), or in case of a buildable ground (seller being a VAT subject or a professional), or in the case of properties being sold by professionals that opted to VAT :
This regime is in fact quite complex today due to recent regulations, and it now depends on the fact that the seller might or might not himself be a VAT subject.
Also, to be taken into account, the way the seller made his own purchase (sale on plan or already fully built) (There might be various other VAT/transfer duty regime in the case the purchaser performs a business activity in France and is already submitted to VAT).

In case the VAT applies, then the transfer duties may be limited to 0,715% (instead of the above mentioned 5,81%).


Purchase of shares of a company owning the property :

• French company : the sale is subject to a rate of 5% to be paid by the purchaser, on a price based on the value of the real estate less the justified liabilities of the company, including the shareholders loan accounts,
• Foreign company (for instance Monaco SCI) :  Same as above except that depending on the company’s country’s regulations, other additional tax duties or formality costs may be necessary (such as with Monaco SCIs where there is a 1% tax over the shares price).

• It is usual to recommend to foreigners for complicated French reasons an individual ownership or the ownership by a dedicated civil company named SCI (owned itself by individuals), as opposed to another type of company in France or a company in any other jurisdiction owning the property.
Indeed, in the case the property is owned by :
* an SCI owned by a French or a foreign company,
* or by a French company other than a SCI,
* or by a foreign company,

then these companies are subject:
a) annually, to the “French corporate tax” (even if the property is not rented out) based on the estimation of the “benefit in kind” in the hands of the ultimate individual shareholders or third persons using the property,
b) to a specific computation of the future “capital gain”, which is in such case never exempted for duration of ownership, and based on the difference between the sale price and the initial purchase price, being itself reduced by 2% to 4% per year of ownership, which means an increase of the taxable capital gain, with a rate of tax of 28% (French corporate tax),
c) to the obligation of disclosing the names of their ultimate individual shareholders in view to avoid the “annual 3% tax”.


• On the contrary : ownership by an Individual, or through a Civil Company (French or Luxembourg or Monaco Civil Companies, called “SCI”) owned by individuals (ultimate beneficial owner) :

a) is not subject to any taxation in case the property is not rented out. It must be noted that the owners (individual or shareholders) could however become subject to French income tax, even if the property is not rented out, should they be:
- resident of a country not having signed a double tax treaty with France,
- or considered as French tax residents under French tax provisions, and according to a double tax treaty if any.
The criteria to be subject to French income tax in the latter case are just one out of the following:
- living in France for more than 183 days during a year,
- having his family living in France,
- carrying in France a professional activity,
- having in France his main economic assets.

b) is subject to the so called private capital gain tax provisions, under which the capital gain is tax free after a certain period of ownership shown below (because of a reduction of capital gain per year), and is subject within this time limit to the rate of 36,2% for non EU (EEE) resident, or of 26,5% for EU (EEE) resident.
Knowing that there are two different scales of period of ownership :
- 22 years for the « tax » itself (19%)
- 30 years for the « social contributions » (17,2% if the seller is French or outside EEE resident, or 7,5% if the seller is EEE or Swiss resident).

This capital gains tax is completed by a “surtax” scaled but limited to 6%, in the case the gain was superior to 260.000 Eur.

Caution : only a private (direct or through a French SCI) ownership allows to be fully exempted of capital gains tax and surtax in case of a French tax resident selling his main residence (not through another company or structure)

(Beware : as you can understand, each case requires a detailed study)
At the present time, the few tax treaties that were allowing capital gains tax exemption (Luxembourg, Denmark and Lebanon…) have all been reviewed so that only few exotic ones seems to be pending (but for how long ?) together with high risks of being challenged by French Tax authorities as a Tax Abuse of Law.

This question may be an issue only in case of the owner being a VAT Subject who is performing heavy works to be completed on the property. (For instance a huge renovation over an existing property, or the construction of a new property over an existing buildable ground).
In this case, the resale may itself generate VAT at 20,00% rate, included in the price of resale, if it is performed within the 5 years of the end of the works.
But once again with the actual legal provisions in this field, this matter depends mostly on the VAT regime of the seller himself, and therefore each case requests a prior study with my services.
For any questions re VAT, I shall be ready to give you more precise information.

In the case the Net French taxable assets of the non-resident exceeds 1.300.000 Eur on the 1st of January of each considered year, the annual Wealth Tax is due following a bracket evolving with the size of the said taxable assets :


• Accepted debts :
It must be noted that for the computation of the net value of the assets, any liability duly justified may be deducted, as long as it is connected with the asset, and under normal conditions (interests, duration, repayments conditions…) such as a loan granted by a Bank (this is preferable to a loan by another Entity, as French tax authorities may try in such case to characterize the identity of person between the Borrower and the Lender…) and preferably with a charge/mortgage against the property.

• When the real estate is owned through the medium of a company :
The shareholders loans or current accounts lodged in Companies (themselves owners of the Property) may be considered as non deductible liabilities of the company when defining the value of the shares from a Wealth Tax point of view.
The other debts are fully deductible from the assets regarding the valuation of the shares.


5 - PURCHASE IN VIEW TO RENTING WITH FURNITURE

It is important to note that an SCI is however not to be recommended in case the property would be rented with furniture in it, because this would result in the SCI falling in the same taxation as companies above mentioned (French corporate tax), and losing the 30 years capital gain tax exemption.
But there are solutions including organizing the ownership of the furniture and the rentals through another person/structure.

Finally, it is worth noticing that any project of construction, addition, or heavy refurbishment of the property should be subject to a prior study of myself and/or an architect in view to estimate the potential necessity of obtaining administrative licenses or permits, which may not always be obtained, depending on the importance and details of your project (if any).
Your purchase should entail in its negotiating aspect, the question of clearing this up or not prior closing, depending on the seller’s position.

• Private inheritance law :
Since the enforcement of the new EU regulation dated 17th August 2015, it is worth knowing that direct individual ownership of a property necessarily entails the enforcement of the Inheritance law of the Client’s last Country of domicile.
It is worth knowing however that this “Domicile inheritance Law“ may well give competence back to French law provisions for the inheritance of the real estate (which entails the respect of the French “Réserve” that protects the children).
This is the case for instance with : USA, United Kingdom and Ireland.
It is possible to avoid complex situations by completing a Local or a French Will that will designate in a “professio juris” the National law of the client in view to governing and ruling his worldwide inheritance, notably his French estate, under one single Law (his national Law).

On the other hand, the ownership of the property through a company will also allow the application of the Domicile inheritance law of the owner of the shares (without any will) : these shares will be devoted to the heirs depending on the legal provisions of the country of residence of the deceased person.

It is also possible to amend the Marital law through a postnuptial agreement in France that will organize differently the fate of the French assets, and shall have an impact on the inheritance. This concerns clients that are married and is not to be prescribed in case of existence of children from a previous union.
(Of course solutions or choices will depend on the client’s situation and are to be defined directly with the notary)

Please note also that for non-French tax residents only, their shareholder’s accounts in a Foreign company (owning the French property) may escape the French inheritance tax – but this might change in the near future, depending on French administration positions.